The Crux Series - Tetons, Shasta and more with Jeremy Jones The Crux Series is a collection of interviews with climbers and riders that have a wealth of knowledge about each of the peaks in our glasses. We explore their experiences with the mountain and specifically what the crux of the climb was for them. On any route that could be preparation, the approach, a specific move, or the whole damn thing.

In our second installment in the series we catch up with the legendary big mountain snowboarder, founder of Jones Snowboards and Protect Our Winters, Jeremy Jones . Jeremy’s alpine accomplishments are all inspiring, but we focus our conversation on his experience in the Tetons and other iconic peaks on the west coast in North America.

Jeremy shares his experience on The Otter Body line with Zahan Billimoria and Bryan Iguchi - one of the most iconic big mountain lines in Teton National Park starts atop the 13,775 ft Grand Teton. The hanging snowfields of this line, visible from the entire valley, are perched over massive cliffs that require perfect turns and multiple rappels to navigate safely. His climb and descent  are just some of the incredible climbing and riding documented in his 2014 movie Higher with Teton Gravity Research. The first descent of this unreal line by Doug Coombs, Mark Newcomb and John Griber in June of 1996 is captured in the documentary The Otter Body Experience and made what most people thought was impossible, possible.

WHAT IS YOUR RELATIONSHIP WITH THE TETONS?

Actually, I never heard of the Tetons growing up in Massachusetts. My brother had moved out west to Colorado. I was catching up with him over a payphone, and he said he was in Jackson Hole, WY. I was like "Where is that, and what are you doing?" What my brother was describing sounded so different: cowboy town, one tram, huge steep lines. Then, at 16, we had a family Christmas in Jackson. I remember getting off the plane when my brother pointed out the mountains to me, and I was in complete and utter awe of the Tetons in general and couldn't believe there was a resort there. You couldn't see any trails then, and it was just way beyond my wildest imagination.

HOW HAS YOUR EXPERIENCE WITH CLIMBING EVOLVED AS IT'S BECOME A BIGGER PART OF YOUR SNOWBOARDING?

I lived in Jackson for a while, and was always hiking out from the resort. I was fortunate enough to live there the first year the boundaries opened, and I knew there would be a point when I would get out into the heart of the Tetons. It actually happened pretty quick. I started seeing all of the crowds and was rushing to get to lines in the side country of Jackson and ended up going all-in on foot-powered snowboarding. The Tetons are all grand and dreamy, but at the end of the day, they kick your ass and are very humbling. Those mountains definitely made me and my climbing evolve, the Tetons make us all evolve, or you do something different. There is an entry fee to stand on those peaks.

WHEN WAS THE FIRST TIME YOU SUMMITED THE GRAND?

It was 2013, mid March, a really cold day. I originally wanted to climb and ride Mt. Moran, which I consider one of the best mountains top to bottom. With good snow, it's the mountain of all mountains due to it's 7,000 ft of direct fall line. I was able to climb and ride Moran in 2010, and then set my sights on the Grand. I set myself up in Jackson for a few weeks in 2012 to try to get a window to ride it, but the window didn't present itself. Then, in 2013, I caught the day of days and was able to climb it and ride off the top in perfect powder. 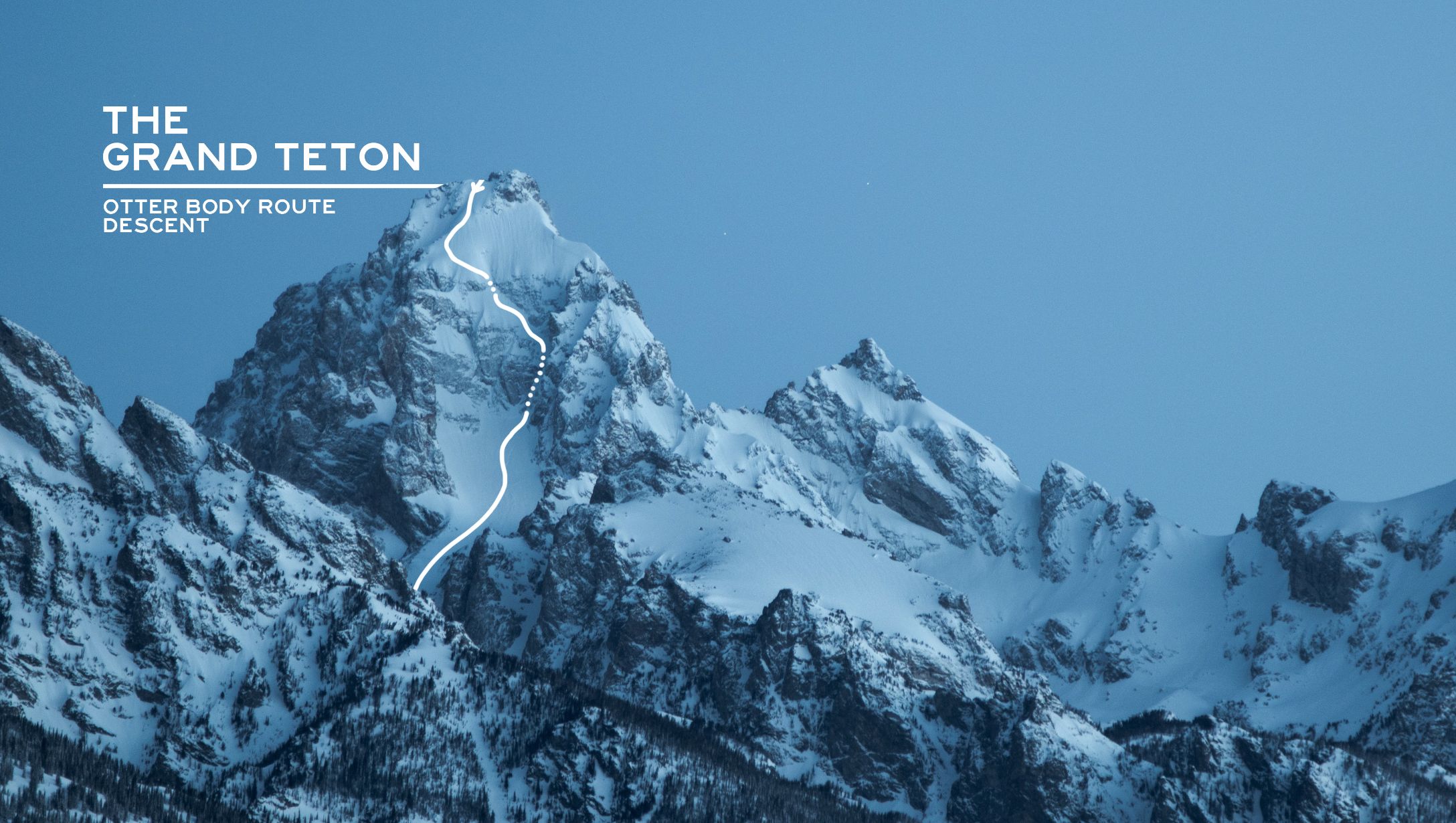 HOW LONG HAD YOU BEEN THINKING ABOUT THE OTTER BODY LINE BEFORE YOU GOT A CHANCE TO GET ON IT?

With lines like that, which are just incredibly exposed, it's hard for me to say "I need to ride that line" because it's hard to imagine the perfect cocktail of conditions that would have to come about for you to be able to say "let's do this". It's zero-mistake snowboarding for hours. So, I hadn't given it that much thought, and then Zahan said, "I think this line is coming into shape." We then kept watching it and building towards it. You'd drive yourself crazy waiting for a line like that. You could wait 10 years for a day on that line, so you just have to kind of let it fall into your lap, which is exactly what I did.

WHAT WAS THE CRUX OF THE CLIMB AND DESCENT ON THAT DAY IN 2013?

When you get on the really serious stuff, it has to be a screaming yes or it's a no. It’s a dangerous spot to be if I had to be talking myself into the safety of the snow-pack or anything else. Our day on the Grand was a really smooth day. We climbed up the backside of the Grand in the middle of the night, so it was incredibly cold. One of the people I was with got some pretty severe frostbite on their feet, so cold management was critical.

Then, I started to get the feeling that "it was time to get off this mountain" when we got to the lower rappels on the descent. We were struggling to find an anchor, we had been in the death zone for over an hour, which is a long time. and I was thinking to myself, "I'm gonna be really happy when we make it through these rappels and get off this mountain, it's time."

WE FEATURE LOTS OF MOUNTAINS THAT YOU HAVE EXPERIENCE WITH IN OUR GLASSES. WHAT IS YOUR RELATIONSHIP WITH MT. SHASTA?

Shasta, for me, is a really special mountain. Come May / June the only thing really in play is the volcanos. At that point in the season, I've usually had over 100+ days in the mountains, probably some serious days on some serious expeditions. It's a time to get out and ride with friends on a huge mountain, a 7,000 ft descent, that you can time right to get really good snow, and very low avalanche danger. It's truly a party shred.

I usually ride Shasta a couple of times a year, but we like to celebrate the end of the season there with what we call "The Harmonic Convergence." It's a come one, come all end of the season party shred, usually in June. We ask people from all over the west to come to join in -d there's plenty of room on that mountain. Inevitably, some of the most passionate snowboarders from around the west show up because everyone else is just in flip flops and it's 85 degrees in town. 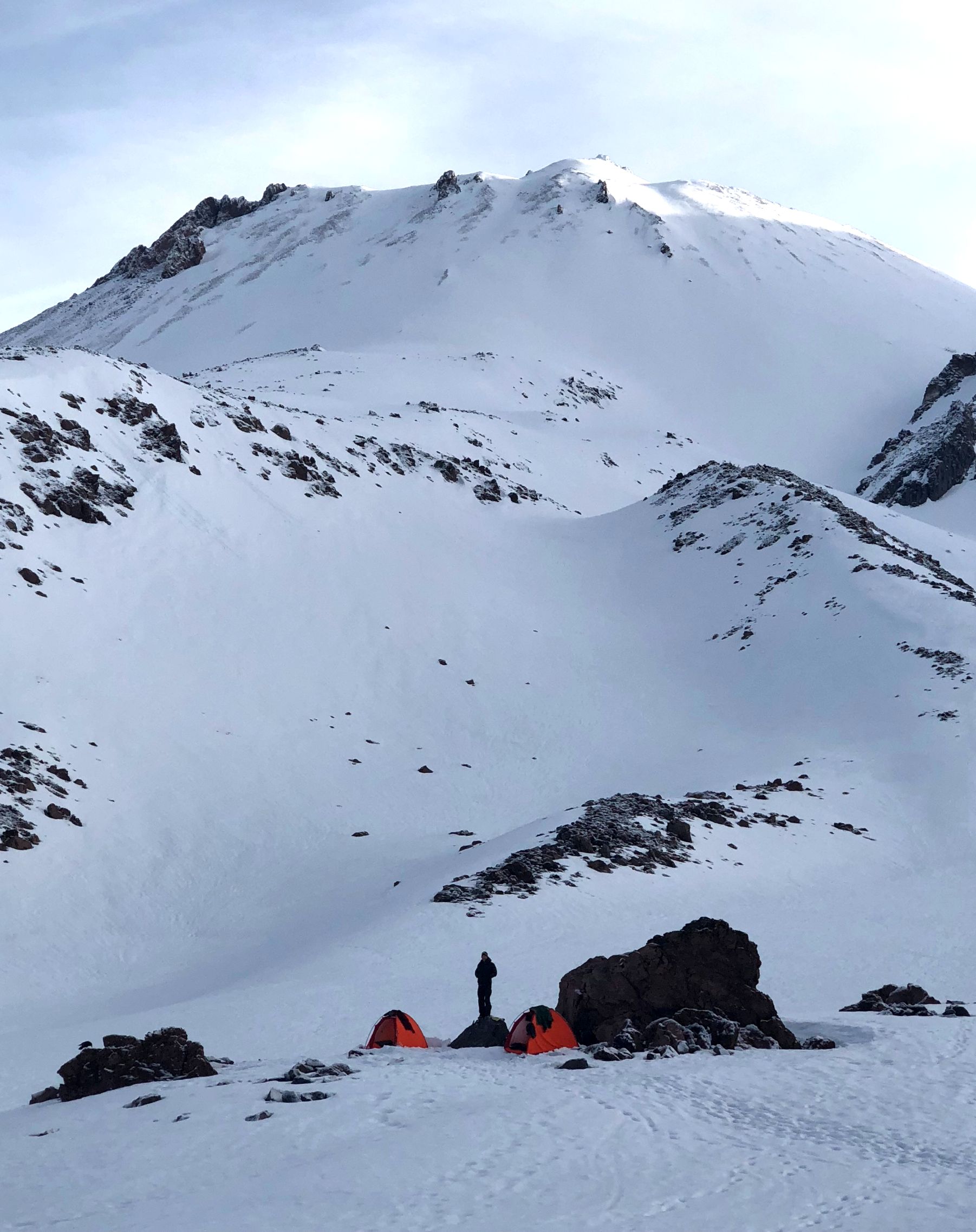 HAVE YOU SPENT ANY TIME ON MT. RAINIER OR THE MAIN PEAK OF MT. BAKER?

Nope, they are happily on my list without a checkmark. They are both a day’s drive from my house, and one of these days I'm gonna check them off. It's nice to have things like that in my extended back yard that I have yet to stand on.

WHAT ARE SOME OF YOUR FAVORITE SIERRA SUMMITS WHEN YOU'RE CLOSER TO HOME?

In the Tahoe area, we have Mt. Tallac which we call it Mother Tallac. She’s a big, beautiful peak right on the lake. It's spectacular, and steep on all sides with hundreds of lines on it. It's easy to ride sustained 3,000 feet stuff there.

Then in the eastern sierra, in the heart of the range - which has an infinite amount of lines - there is a mountain called Red Slate that I consider a really special mountain. That peak rises above the rest for me for lots of reasons.

YOU'VE PUT DOWN SOME OF THE BIGGEST LINES IN SNOWBOARDING, WHAT'S NEXT? ANY PEAKS YOU HAVE YOUR EYES ON?

Well, I call it the wonderful problem: Stand on one peak on your hit list, and see ten more! Too many to list, it's endless. For me, I try to be as nimble and fluid as possible in the season. I see what's shaping up, and what's unique. I won't travel to a bad snow-pack. When I hear of an area that is having an amazing year, with a safe snow-pack, that piques my interest.

90% of my snowboarding is within a day drive from my house. In western North America, the possibilities are truly endless. There is so much unridden stuff, and so many incredible lines that I've never stood foot on or made a turn on.

THANKS FOR THE TIME JEREMY, WE HOPE TO SEE YOU ON THE MOUNTAIN SOON.

BACK TO THE JOURNAL